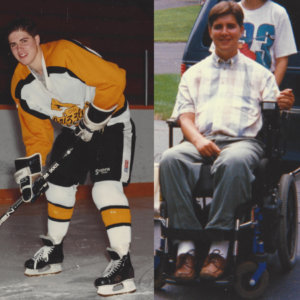 Too many Canadians have had their lives permanently changed because of gun violence.

I’m one of them. At the age of 21, I was shot in the neck in a random act of gun violence and became a C5 quadriplegic.

Too often, politicians react to gun violence with “thoughts and prayers”. Well, pardon my french, but that’s a load of crap.

Thoughts and prayers will do absolutely zero to prevent the next shooting that permanently changes the life of another Canadian.

And that’s just the beginning.

A re-elected Liberal team will continue to take serious, common-sense action to strengthen gun control and crack down on gun crime.

Just as important as what we will do. Here’s what we won’t do – we will not bring back the long-gun registry. Despite what the Conservatives and their spin-machines want you to believe.

Let’s cut to the chase. No one needs a military-style assault rifle. Background checks and safe storage laws are just common sense. Protecting vulnerable groups is the right thing to do.

A gun changed my life 28 years ago. I am working hard – and support the actions of my Liberal colleagues – to make sure a gun doesn’t change the life of anyone else.